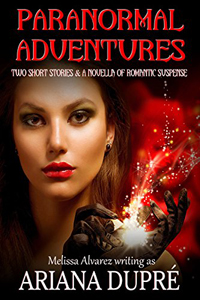 Are you ready for paranormal adventures? First, step back in time with Drakar Holkinverg in his fight to save his lost love Gwyn from the evil Monocaths. Then, go on a holiday vacation to sunny South Florida in Paradise Designs where Tara Simms must confront ghosts and her own psychic abilities. Next you’ll take a trip to Briar Mountain. Jessie Wheaton just wanted to get away from it all but then a mysterious woman appears out of nowhere.

Tara Simms is determined to create a new beginning for herself this holiday season. She’s purchased a new condo on Miami Beach in the ultrachic Paradise Designs Resort and Spa where there is no chance of paranormal activity. She’s looking for a new man and thinks that David Blake, the lead realtor at the high-rise, is a good prospect.

When Tara sees the spirit of a murdered woman enter her condo she freaks out. David offers his protection and his apartment. Together Tara and David must solve the murder and help the spirit into the light.

Sometimes you just need to get away from it all. That’s what Jessie Wheaton plans when he leaves behind a stressful work week and heads for a weekend at his cabin on Briar Moutain. He’s got an important meeting Monday morning and plans to use the quiet time away to prepare.

Jessie never counted on dismal weather and the feeling that someone was watching him. When he finds a woman lying unconscious in his front yard, during the middle of a thunderstorm, he’s struck with the feeling that he knows her, is connected to her. But who is she? Is she the one who was watching him or is something more sinister lurking on Briar Mountain?