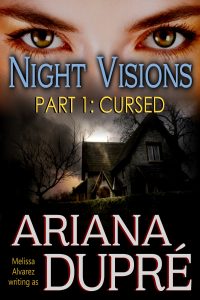 In addition to writing nonfiction, I also write romantic suspense under the pen name Ariana Dupre. For the past four years, I’ve focused on nonfiction but am releasing more fiction in the coming months. In an effort to begin promoting my novels again I’ve serialized Night Visions, designed new covers, and am giving away Part 1: Cursed. This way, readers can sample the book for free before committing to buying the whole thing. If you like what you read, Part 2: Burned is only $0.99, Part 3: Fated is $0.99 and Part 4: Seized is $0.99. Or, if you like the free Part 1: Cursed, you can also jump straight to Night Visions: The Complete Serialized Book for $2.99. I set it up this way so that the serial and novel are the same price and readers aren’t overpaying for the serial. Check it out and pass the word! Thanks!

He appears to her every night, chasing her until she’s trapped behind the barrel of a gun. A stalker who wants her dead. Terror jolts her awake with vivid scenes of her death. The problem is that Angelina Benton’s prophetic dreams always come true. The day Jared Maxwell in walks into The Variety Vine, the nightmare becomes reality. Circumstances force Angie to work and live with Jared. If she refuses, she loses her home and business. If she agrees she may lose her life.

Love at first sight isn’t possible in Jared Maxwell’s mind. When he meets Angelina his world turns upside down. He’s determined to gain her trust and win her love even though he has an ulterior motive for being in Dansburg, Virginia.

Strange events unfold during the renovation that put Angie’s life in danger. Despite her fears, she realizes she’s falling in love with the rugged man from her dreams.

She learns that she may be one of three destined to break a two hundred year old curse. Can she overcome her fears and suspicions to fulfill her destiny or will trusting Jared be the ultimate mistake?

Note:  This book was previously published elsewhere under the same title, but has been expanded, revised and re-edited.

There was nowhere to hide.

Angie Benton watched the young woman running through the forest. As she fought the brush and bramble, her torn clothes ripped even more.

She tripped over a tree root and fell to the ground. Quickly, she struggled to her feet while leaves caught in her hair and briars slashed her arms, drawing blood.

Angie could feel the woman’s terror—like a knife slicing through her own heart. Just then a man appeared. Angie, watching from a high perch in the trees, trembled. What now?

Jaw clenched, eyes narrowed, the man opened and closed his fists repeatedly as he tramped toward the frightened woman. His shirt was unbuttoned, revealing the sweat glistening on his heaving chest. He looked so angry, so hostile. She could even hear the fury in his strong, deliberate footsteps.

The woman heard him, too and looked over her shoulder.

Angie gasped. The woman’s face was her own! Horrified, Angie watched the woman who could be her twin run into a clearing, then pause and look frantically around. She could feel her desperation and when the other woman sprinted across the meadow toward an old shack, Angie experienced a jolt of hope and a burst of energy as she mentally followed her twin.

Arriving breathless at the cabin, the woman jumped onto the porch, pushed through the broken door and ran into the first room on her left.

Angie spotted an exit at the back of the shack. She willed her twin to find it and escape that way. Instead, the woman ran wildly through the house in terror, searching for a place to hide.

Entering the kitchen at last, she didn’t run out the back door as Angie willed. Instead, she crouched in the corner behind an antique hutch. The old pine floors creaked as if under a heavy weight.

Tentatively, the young woman stood up and glanced around. Inching toward the back door, she looked through the screen and out the side windows, surveying the yard with wide, frightened eyes.

Cautiously, she opened the door and slipped out. With her back to the yard, she quietly closed the door behind her, then spun around to make a run for it.

And crashed right into her pursuer.

A loud whistle pierced Angie’s hearing. What on earth was happening? Someone was pulling her from her perch. Someone had a grip on her biceps and searing stabs of pain were shooting through her arms.

She looked up and stared into the angriest blue eyes she had ever seen.

Eyes belonging to the man she’d just seen outside the cabin door. Her heart pounded. How had she become the woman she’d been watching? The man’s sandy brown hair hung over his face in wet strands, its blond highlights still noticeable. Sweat beaded across his brow. He clenched his jaw against chiseled cheeks and he tightened his grip by digging his fingers deeper into the soft flesh of her arms. Angie jerked her body violently, but could not break his hold. Wave after wave of terror crashed through her. She had to escape!

“Angie!” he growled. She snapped her head back to look up at his angry face.

A flash of light in her peripheral vision caught her attention and she turned to see someone, shadowed by trees, leveling a gun at them.

Angie froze. As if in slow motion, the muzzle of the gun moved until it was pointing straight at her. She heard a booming blast, so loud it hurt her ears. Oh God, I’m going to die, she thought in terror. The man with the sandy hair whirled her around, using his body to shield her from the oncoming bullet. Suddenly, his face contorted, his back arched and his grip on her arms loosened, then released, as he fell to the ground.

Angie watched him land in a crumpled heap at her feet. She’d barely had time to take this in before she felt something hard and cold jab into her back and an arm clench around her neck, forcing her to look skyward. She heard a deep, raspy, laugh behind her as a man dragged her backward, knocking her off her feet with a quick pull, his laughter intensifying. Angie struggled frantically with the gunman. She was so desperate, so frightened, that several seconds passed before she noticed that the man who had come between her and the bullet was no longer there.

Where had he gone?

The pressure increased against her throat.

Angie twisted and turned, trying to break free, trying to find the man who had saved her before.

But it was useless. He’d disappeared and the more she struggled, the more her assailant tightened his hold. Then the realization hit her. The sandy haired man was dragging her across the yard. Somehow, he’d captured her. A gunshot rang out.

Fire burned through her chest. The man pushed her and she sank to the ground, feeling her life ebbing away.

Check out the other parts in the Night Visions Serial: 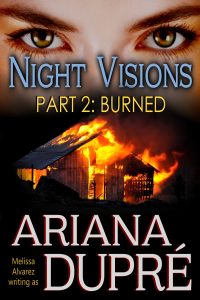 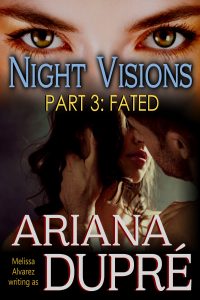 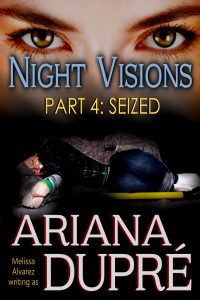 The entire serialized novel is also available as a boxed set: 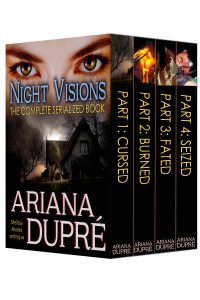